If you are a fan of Zooey Deschanel, you must have seen her very famous tuxedo nails she wore to the golden globes 2012 awards. 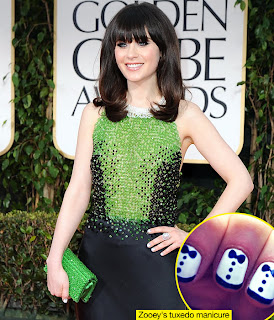 She tweeted on her way to the awards ceremony “I’m wearing a gown but my nails are wearing tuxedos!!!”

So amazing right? You need guts to carry such a nail art with a gown! So i decided to write a tutorial on how to do this tuxedo nail art..

Step One: Paint your nails with two coats of white nail polish and allow it to dry.

Step Two: Take a striper brush and do a french tip to your nail using black nail polish. Allow to dry.

Step Three: Make two to three dots with the help of dotting tool dipped in black polish. The dots should be made vertically along the center of the nail.

Step Four: For the bow, make a ‘X’ (as shown in the pic) using a striper or toothpick dipped in black polish..fill in the ‘X’ such that a bow is formed.

Can you carry this nail art with a gown??

Now that you have read my post, I would love to read your comments about it :) Cancel reply